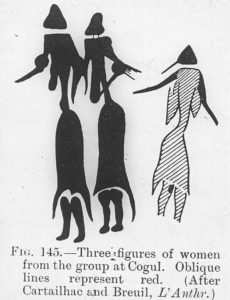 The equinox was 5 hours ago. Still, now at dawn, with the moon just turning red there’s no decision on the new underworld King.

I told you it was crazy up The Stiperstones this red moon’s Winter Solstice! Surrounded by angry giants beating the earth to a mad drumbeat, the devil throwing ghost boulders of dead men’s bones while the witches curse themselves into a wanton stupor. Fornicating devil fairies drip ooze from above. Ogres, demons and goblins are everywhere. All there to pick the underworld’s king for the year. This year the prize of the red moon is extra special.

The enraged giants mark the beat, bashing the earth as a drum roaring, “stop!” “Oi, cuttitout!” These are the only words I can quote. I see The Wrekin Giant, Stokesay’s two, The Clee Gang. Celtic, Welsh, Cornish, Irish… I thought I saw a Japanese? There’s too many to count both the Pontesford and Clun valleys are full of really, really mad tub thumping giants. All in their battle dress. Foul soldier mouths twang the bass line for tonight’s song.

The devil raining ghost boulders of dead men’s bones on their mountain homes. I think Clun and Hereford bought it in this shot. Huge boulders, two at a time hurtling out of sight! Tinkling dead men’s bones chime the high notes of the cruel melody. As the host with the most, the MC, the main man, he calls the tune.

Heavens above rain comets and sandbags of shooting stars to dampen the clatter. 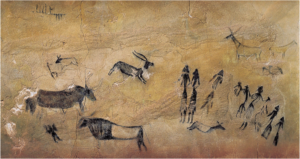 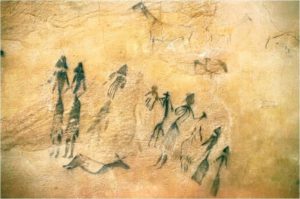 Every witch that ever there was

Witches first gather to read their spells and run through the proceedings of the night. Conjuring up the spirits of the black heart they move off holding hands in a speeding screeching circle as the wanton madness begins to overtake their bodies in their desperation to lay with the devil. Over near Cranberry Rock, hundreds sit down waiting the result: who will be the big boss for this special, special, extra-special Winter Solstice? On the edge of Manstone, atop the frozen witch rock, it looks like she’s casting the last spell. Should be a good one this year. I don’t mean good as in nice. I mean spectacular and astounding and downright evil. Ah! She’s starting off with some of that old black magic, nice touch.

Fornicating devil fairies flash with the mayhem’s pulse like ballroom mirror balls, dripping and spluttering fairy goo, fluttering down on the hot breaths of the hot witches. The fairies are a bit of a nuisance actually, dribbling and dripping sweet sticky goo flashing and twinkling like microscopic firework festivals, making everything sloppy and slimy, including my camera lens.

Dead skeleton fairies, piloting bugs and dragonflies, hum buzz whiz and whine dogfights jumping and boarding each others’ transport. Do as they say or they eat you. Everybody has come to vote for this special year.

Every winter solstice it’s the same. But tonight it’s the red moon, a lunar eclipse. They go really nuts! It’s worse! That volcano in Iceland has made the moon hot bloody red! Everything seems too red.

Tsk! Bats everywhere. Ghost bats. Unlike mortal bats, they go right through you! Grrr, grring as they come at you.

Everybody’s here. Here to pick the Underworld’s King for the Year.

The devil spilt an apron of rocks here, back in the day, he’d come from Ireland to fill Hell’s Gutter. He’s been really cross with this spot ever since. The Devil himself first appearing enthroned upon the ancient rocks to receive homage from his witches in the locality and tonight from far, far away, too. When his Satanic Majesty comes to the Devil’s Chair he sits down particularly heavily and sometimes several times. You see, it seems he is always trying to force his stony throne into the ground because when the Devil’s Chair sinks below the level of the ground then England will fall.

All the local witches. Mitchell, I see. Many I didn’t know.

Once up on a time, a giantess came stealing rocks. She heaped piles of rocks into her apron and tried to take them away to her home. Up popped the devil and rushed after her cutting her apron strings with his talons. The rocks fell to earth and the giantess ran away never to return. She’s there too, in the background, tub thumping.

[NOTE] When visiting, be sure never to enthrone yourself in the Devil’s Chair, for when a human being does so it angers the Devil and there is sure to be a great thunderstorm!

And be sure! I didn’t think for longer than a second that I should sit in that seat, this night.

Dragon wings on my hat wouldn’t have done much good.

Geologists tell us that the highest points of this great jagged quartzite ridge jutted out above the surface of the glaciers during the last Ice Age. At 536 metres above sea level it is the second highest hill in the county, surpassed only by Brown Clee Hill 546 meters. Stiperstones’ five-mile (8 km) long summit ridge is crowned by several rugged, jagged outcrops of rock silhouetted against the sky.

Atop the quartzite ridge formed some 480 Million years ago, the Stiperstones: directly in front is the Manstone Rock tor with its trig point; to the left Cranbury Rock tor; just out of sight right, is the Devil’s Chair tor. In the distance, the Breacon Beacons through to Montgomery across to Titterstone and Brown Clee. Behind us is the Long Mynd, over into the valley in front of us, is Pennerly. We’re looking west and south from this point. Down to Hereford on the left and across to Aberystwyth, through the devil’s legs.

Looking to  the east the three bright stars in Orion’s belt stand in a nearly vertical line above. Hanging from his belt, the stars and nebulae of the Hunter’s sword are visible lower and to the right. Yellow-orange Betelgeuse is the brightest star on the left. As winter progresses in Earth’s northern hemisphere, Orion will rise earlier and so appear continually higher in the sky at sunset.

The last time there has been a full eclipse of the moon with the shortest day in winter was 1638 no less than 400 years ago and is not expected to recur happen before 2094. (The last time a lunar eclipse occurred was in February 2008.) 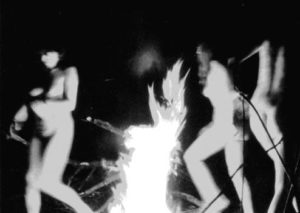 There are forty-five figures, of which thirty-eight are painted bright red, black and dark red, seven are engraved on stone. A dance scene is the most famous of the paintings featuring 9 women in pointy hats dancing around a male figure with abnormally large phallus. Along with humans, there are several animals. The dancers of Cogol: a rock shelter containing outstanding paintings of prehistoric Levantine rock art in El Cogul, in the autonomous community of Catalonia, Spain.

In Wicca and Paganism/Neo-paganism, the term skyclad is used to refer to ritual nudity. Some Wiccan groups, or Traditions, perform some or all of their rituals skyclad.

One of the two primary deities found in some neopagan, especially Wiccan, religions; also known as Cernunnos, Pan, the Green Man and Herne the Hunter. He represents the male part of the religion’s duotheistic theological system, the other part being the female Triple Goddess or other Mother Goddess. In common Wiccan belief, he is associated with nature, wilderness, sexuality, hunting and the life cycle

The Sorcerer is one name for an enigmatic cave painting found in the cavern known as ‘The Sanctuary’ at Trois-Frères, Ariège, France, made around 13,000 BC. The figure’s significance is unknown, but it is usually interpreted as some kind of great spirit or master of the animals. The unusual nature of The Sanctuary’s decoration may also reflect the practice of magical ceremonies in the chamber.

Cernunnos is the conventional name given in Celtic studies to depictions of the “horned god” of Celtic polytheism. The name itself is only attested once, on the 1st-century Pillar of the Boatmen, but depictions of a horned or antlered figure, often seated cross-legged and often associated with animals and holding or wearing torcs, are known from other instances.

Be the first to review “Stiperstones Winter Solstice 2010” Cancel reply