Wrekin view to Caer Caradoc and the Nation of Hillforts

A Nation of Hillforts 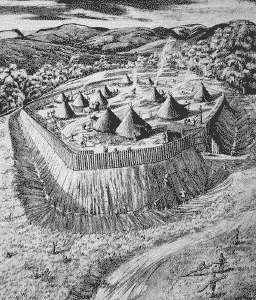 A hill fort is a type of earthworks used as a fortified refuge or defended settlement, located to  exploit a rise in elevation for defensive advantage. They are typically European and of the Bronze and Iron Ages. Some were used in the post-Roman period. The fortification usually follows the contours of a hill, consisting of one or more lines of earthworks, with stockades or defensive walls, and external ditches.

The Cornovii were a Celtic people of Iron Age and Roman Britain, who lived principally in the modern English counties of Cheshire, Shropshire, north Staffordshire, north Herefordshire and eastern parts of the Welsh county of Powys. Their capital in pre-Roman times was probably a hill fort on The Wrekin. Ptolemy’s 2nd century Geography names two of their towns: Deva Victrix (Chester), and Viroconium Cornoviorum (Wroxeter), which became their capital under Roman rule.

The name itself may mean “People of the Horn”. Graham Webster in The Cornovii (1991) cites Anne Ross’s hypothesis that the tribal name(s) may be totemic cult-names referring to a “horned god” cult followed by the tribe(s). There is no direct evidence of this; however, Webster points out that it is interesting that at Abbot’s Bromley the “horn dance” has survived from pagan ritual—Abbot’s Bromley being only 55 km north east of the old tribal centre at Wroxeter

Their territory was bordered by the Brigantes to the North, the Corieltauvi to the East, the Dobunni to the South, and the Deceangli, and Ordovices to the West. 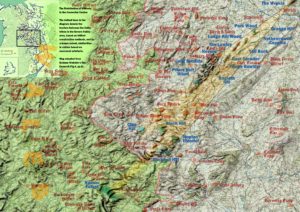 The people who inhabited the very north of the British mainland (modern Caithness), and Cornwall were also known by the same name, but according to mainstream or academic opinion were quite separate and unrelated peoples.

The Cornovii produced little in the way of identifiable ceramic wares. Their sites are identified by construction details of their hill forts and metalwork artifacts. The Cornovi built numerous hill forts, including Titterstone Clee near Bitterley. Old Oswestry hill fort is also thought to have been inhabited by the Cornovii. One of these hill forts is probably that referred to by the historian Tacitus as the last refuge of the resistance led by Caratacus in 50 AD. However, the nature of hill forts is strongly contested among archaeologists, with some crediting them only as tribal status symbols or cattle stockades rather than defended settlements.

The tribe developed no known coinage, but their control of the south-Cheshire salt-making industry and parts of its distribution network probably gave them a fair degree of wealth, multiplied by trading and cattle breeding. However, their economy was mainly a pastoral one. Since the early Iron Age they had had a network of paved and semi-paved roads good enough to transport their famous chariots.

It should not be assumed that the Cornovii looked like paint-daubed savages; the Romans, who described the British as “vain”, noted their attention to appearance and personal hygiene. Gold and bronze torcs (i.e.: heavy necklaces made of twisted strands of metal) have been found at Iron Age sites in the region. They were expert in weaving and dyeing, and loved bright colours. Women wore their hair in two thick thigh-length plaits

Some suggest that a lack of metal and fine pottery finds may be indicative that the Cornovii were not a particularly wealthy or sophisticated British tribe and that they depended mostly on a pastoral economy even though some cultivation of cereal crops appears to have occurred in the river valley areas. These aforesaid lowland areas seem to have been populated by rural peasants who were obliged to pay tribute in cattle and grain to the local chieftains resident in the hillforts.

Recent thinking concerning the role of the hillfort during the Iron Age has suggested that visual connections between hillforts reflect a relationship, perhaps one of kin or allegiance, or both.