Sheinton Street, Much Wenlock (east side)

The police station in Ironbridge has the same grey/cream coloured brickwork; special blue bricks believed to have been made in Broseley.

The stocks at Shrewsbury were last used in 1850 when a policeman was convicted of being drunk and disorderly. On completion of his sentence, the officer in question actually received a standing ovation and benefitted from a collection made on his behalf.

The last offender to be sentenced in Much Wenlock was Thomas Lloyd in 1852.

The Pillory was similar to the stocks. They secured the head and arms of the offender whilst they remained in a standing position. Like many forms of punishment, the pillory was designed to ridicule the offender in public and to deter others from similar crimes. Like the stocks various items were thrown at people placed in the pillory and this could lead to injury. In 1803 a Shrewsbury landlord was fined for providing short measures in his pub. He was threatened with the pillory should it ever happen again! The pillory was finally abandoned as a means of punishment in 1837.

In 1801, flogging was administered to Edward Browne, who was led around Much Wenlock at the back of a cart for two hours as he was whipped. Such punishment had been used for many years and continued into the nineteenth century. Whipping was commonly carried out in public to set an example to others. Those being whipped were attached to some form of whipping post. This was either a permanent structure or a suitable alternative. The railings in front of the old Market Hall at Shrewsbury were once used for securing the guilty as they were whipped. 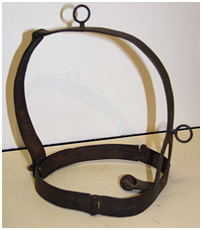 The Brank or Scolds Bridle was used to punish people who disturbed the peace by being noisy and abusive. The brank was a helmet which was fixed around the head of the offender. Attached to the inside of the helmet at the front was a gag or tongue plate which stopped the tongue from moving and therefore prevented speech. Sometimes a more dangerous attachment, such as a knife, was used. Once the helmet had been attached, the guilty party was led around in public to set an example to others. The last recorded use of this punishment in Shropshire occurred in Shrewsbury during 1846 when a woman from Frankwell was given the Brank for being rude to her neighbours.  The Brank served a similar purpose to the earlier ducking stool.